Ser Seymor is a character and NPC encountered in Fear & Hunger. He is part of Buckman's party, sent to the Dungeons of Fear and Hunger to find out what had happened to it and to the man called Rudimer.

Ser Seymor is a knight wearing chainmail armour with a tabard and a chainmail hood. He's found sitting down, wounded from an encounter with an acid-spitting monster (one of them is found slain nearby) which he warns you about.

Ser Seymor can be found in Level 3 Basement in the upper right corner of the area. He informs you that he has a mission to fulfill down in these dungeons along with his comrades, but unfortunately each of them got lost. His priority is to regroup with Buckman and the rest of the party.

After defeating Trotur you can speak with Buckman and tell him about the location of Ser Seymor, so they can reunite in the basement.

Further, if Buckman is reunited with the heavy knight in the basement, a unique dialog option will appears where Buckman admits to fearing the rest of their party is most likely still dead and award the player 40 silver. The heavy knight will suggest they only worry about their own well being now and to continue going deeper in the dungeon. Talking to them will result in them forming a marriage in Level 7 Catacombs after visiting the ancient city and losing a valuable accessory given by Buckman, the Ring of Wraiths.

However, if the player chose not to talk to them after they are reunited in the basement, both of them will not proceed to fuse into a Marriage. After Jeanne is rescued and brought safely back to them in the basement, Buckman will inform the player that they never thought to delve deep enough into the ancient city, thus preventing them from forming a marriage. Talking to Jeanne will now inform the player about the next member of Buckman's party to rescue, Ser Seril.

If you sell out Buckman to Trotur, you can tell Ser Seymor about it if you find him in the Level 3 Basement. Your player character will always leave out his/her participation on Buckman's death.

The player character will have to go back to where Trortur is, to see the outcome. When they get there, they will see Ser Seymor standing over a dead Trortur, the heavy knight having slain the killer by stabbing the insane torturer on the head, avenging the dead Buckman.

Talking to Seymor will yield no reward, only words of him failing Buckman and the quest. And the player character noting how Seymor's stare looked... blank...

It is currently unknown what happens to him afterwards, but it is presumed he might have left the dungeon soon after and the quest to rescue the rest of Buckman's party ends there. 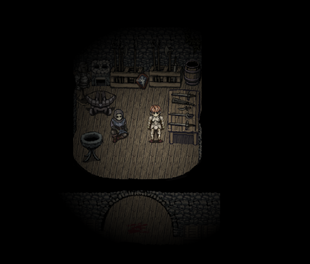 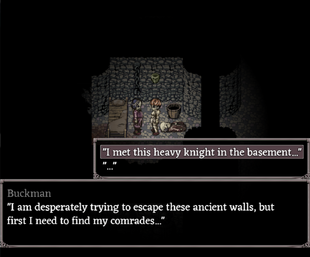 Telling Buckman about Ser Seymor
Add a photo to this gallery
Retrieved from "https://fearandhunger.fandom.com/wiki/Ser_Seymor?oldid=4370"
Community content is available under CC-BY-SA unless otherwise noted.